Added by Paolo Sulprizio about 14 years ago. Updated almost 9 years ago.

It would be useful the possibility to save custom queries for roles.
To save them in query edit, could be added a multiselection combobox with roles (and eventually another one with users) instead of "Public query" checkbox. The actual selected checkbox would correspond to the roles in the combobox all selected.

Probably it should be also useful the possibilty to configure is a role can create queries for every role, only for its role, for him or none. Otherwise, as now, only for administrators is possible to save role based queries.

Now that are implemented groups of users, it could be a per group custom query, if is judged to be more correct or useful.

Updated by Darren Cook over 10 years ago

+1 for this, I just ran into this issue where I want to create "public" queries for my manager and team, but don't want the rest of the user base seeing them. Role/Group/User permission would be very helpful. Thanks!

Updated by Filou Centrinov about 9 years ago

Updated by Filou Centrinov about 9 years ago

Feature added in r11994. Instead of a public checkbox, there's now 3 options. The second one lets you choose which roles are allowed to view the query: 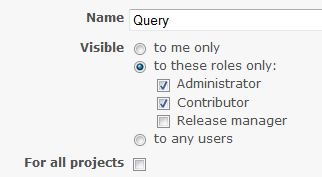 great feature! But what happens to existing "public" queries?

great feature! But what happens to existing "public" queries?