After upgrade to r2819 i got this strange behavior - all the status/priority changes are displayed twice on the issue screen. For example if i changed status from New to Resolved there would be two identical lines under Updated by: Status changed from New to Resolved. In the email notifications all is normal and reported only once.

Fixed: journal details duplicated when an issue is saved twice (#3690).

Updated by Jean-Philippe Lang over 11 years ago

I'm not able to reproduce. Please read SubmittingBugs and make sure to test without any Redmine plugins installed.

I get this same issue.
I have done some more investigation... it's only when RAILS_ENV is set to production.
I'm running with passenger with RAILS_ENV set to development the duplication of journal entries no longer happens. weird.

It seems that the journal gets recorded twice only with the plugin Issues Group installed. Without it everything looks normal, so i guess that there is some incompatibility with this plugin.

this way everything works as it should be.

Small changes to the code to favor args and return value

is this going to redmine trunk?

Updated by Roland Discein over 11 years ago

I'm not able to reproduce. Please read SubmittingBugs and make sure to test without any Redmine plugins installed.

respect, because they believe the community have to patch redmine sources instead of patching plugins. the solution posted below destroys ability to post issue changes via email. 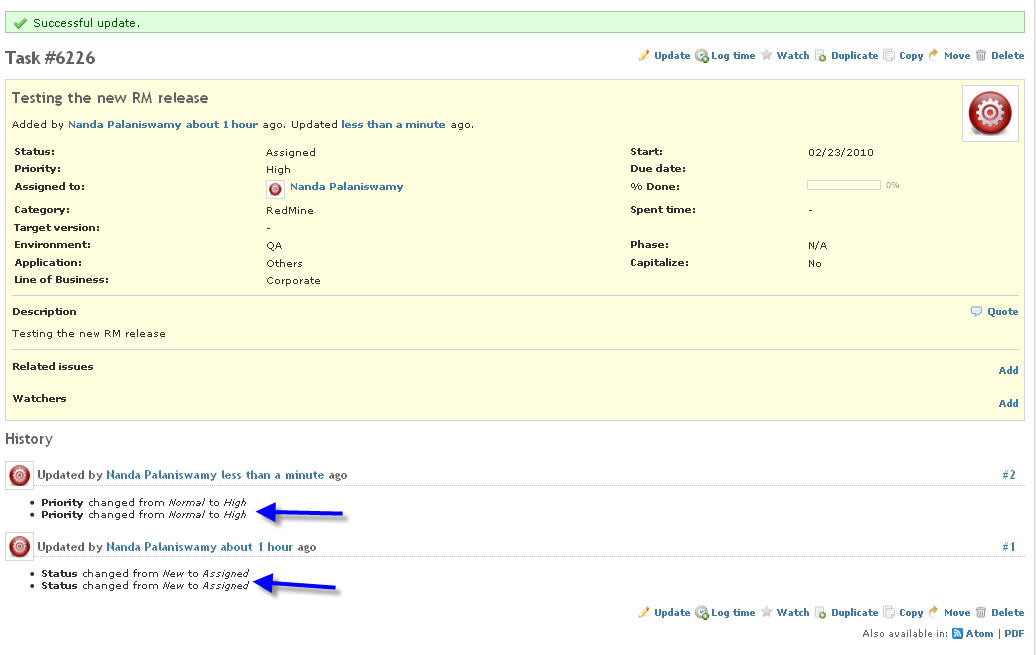 This is fixed in r3499.
Saving an issue twice won't duplicate change details any more.

The fix is not retroactive, it won't remove existing duplicates from your database.
Did the last issue update that I see on your screenshot occur after you upgraded to r3499?

Yes, I am getting the duplicate issue after upgrading to latest revision (Redmine 0.9.3.devel.3514 (MySQL) )

I understand it won't remove existing duplicates from the database

Do you have Issues Group plugin installed? In my case this was related to Issue Groups plugin - it seems that Rails somehow mixes up callbacks chain for after_save for patched issue model.

Well, try to removing plugins one by one starting with those who patch redmine core (just move their folders to the other location) and see if at some moment in time dups will disappear. Or just remove all of the plugins and check it on the clean redmine.

Nanda, I'm really not able to reproduce this behaviour so please try with a fresh checkout.
I'll have to close this ticket if it can't be reproduced.

I tried with a fresh checkout(New database), duplication issue is gone. I think there was something wrong with the database.

You can close this issue.

Thanks for the feedback. But I don't think there's something wrong with your database. You just need a fresh source.