I've created this entry for having several requests for this good plugin. Very useful. Here are my considerations:

Here are the features of version 0.0.9
- Made the plugin compatible with Redmine 2.0
- Fixed the bug - "Comments are not visible for the last row of timesheet"
- French translations for String literals are included

Hi,
are you still working on this plugin?

we installed the plugin and it has already a lot of functionality.
Unfortunately we are missing a functionality, which would be essential for our project controlling.

Our aim is for reporting the work of developers very detailed.
With the current version of the plugin a user is able to create a timesheet row for a specific issue each week and fill in the daily hours.
Per week it is not able to create several rows for the same issue.
For a specific issue a project managers should be able to see, what the developer has done in detail, example:

so it should be able to add for one issue more than one row with different comments, which are descibing the work more detailed.

do you think, this approach is reasonable? could it be implemented in further versions of the plugin ?

Thanks in Advance
Richard

Richard,
thanks for your comments.
yeah, several users have raised this problem, we are looking into this.
we can put that fix in our next release 1.7
We might release 1.7 next month.

For the moment, you could put comments through detail popup or create activities like setup, reproduce, debug, bugfix, final test, publish etc...

Any forecast for 1.7 delivery date? Is it going to be compatible with Redmine 2.4.2?

Adam,
May be next month, we are busy with other stuff right now.
yeah, we will make it compatible with 2.4

RE: Weekly Timesheet Plugin (wk-time) - Added by Istvan Heckl about 6 years ago

"v1.9
-- When a Manager edits a Member T&E, his permission will be checked rather than the member's permission"

This does not work properly. If role A have every time permission and role B has none, then A should be able to record a new log for B but can not.

Two suggestions:
If you select issue based on id and subject, you just enter the issue id (but not select the issue itself), then the time will not be saved. But it is written in green, so you do not notice it.
It would be great if you see here the full issue subject not just the id.

RE: Weekly Timesheet Plugin (wk-time) - Added by Suganya Thulasiraman about 6 years ago

Like we said before, the permission problem will be fixed in the next release

RE: Weekly Timesheet Plugin (wk-time) - Added by Suganya Thulasiraman about 6 years ago

The permission bug is fixed in T&E 2.0, please take a look

RE: Weekly Timesheet Plugin (wk-time) - Added by Istvan Heckl about 6 years ago

As I was testing there is a problem with "Enter issue as ID/Subject". When I check the checkbox I got an unnecessary warning, do you want to leave the page. The main thing is that, when I write part of the subject, select the subject I got an error (no matter which issue I choose, I use chrome): 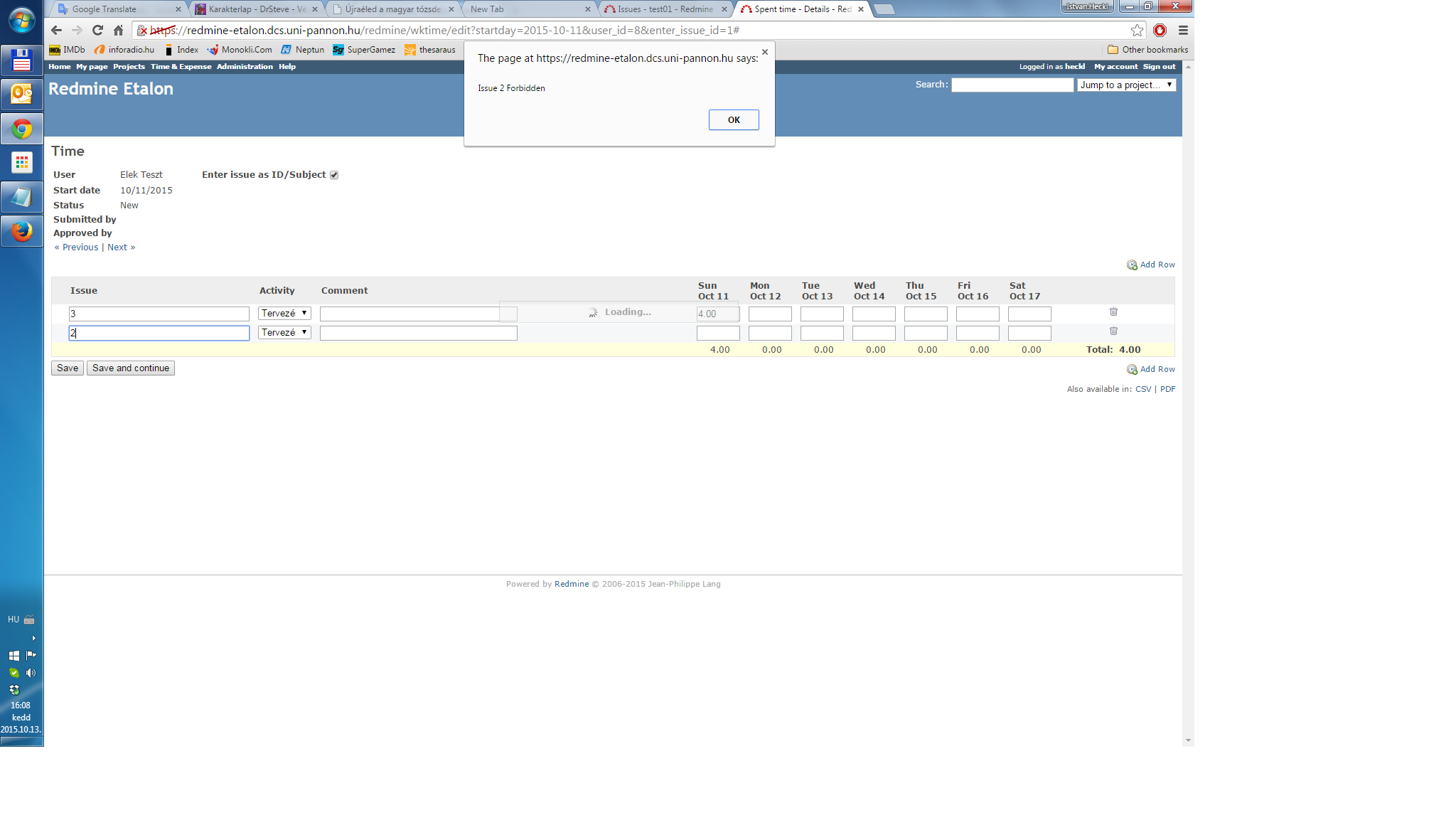 If I do not use "Enter issue as ID/Subject" but menu than it works. Unfortunately the menu is huge.