Added by Felipe Campo over 11 years ago. Updated over 4 years ago.

I wonder if its possible to add a restriction per role , so a role only can see only the issues of a list of assigned trackers.
I propose this because, some of the trackers that we modeled are for internal usage and our should not see the information registered there.

I propose a list of features as showed in the permission reports but for the trackers. And then default behavios should be show all trackers

Updated by Nanda P over 11 years ago

It is possible through "Administration -> Workflow" 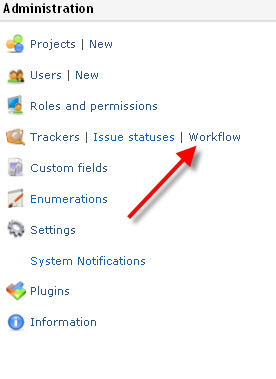 Select required trackers for a role. 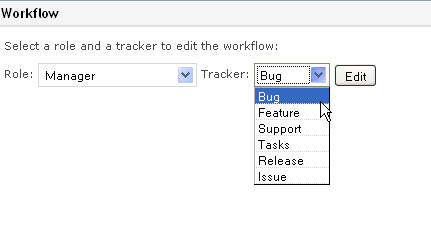 Updated by Paul Macdonnell over 11 years ago

Hi,
I would like to see this as well.
We have several Trackers and several Roles

I'd like it so only Technical roles can see issues in the Incident and Support Tracker.
Likewise the other roles can only see the Feature and Bug Trackers.

This is more than just being able to modify the status of an issue in a workflow (which is what you can currently do), this is allowing roles to see issues assigned to various Trackers or not.

The visibility table would look something like this then:

If a role doesn't have permission to view a Tracker, they are unable to see any issues that have been assigned to that Tracker.

Updated by Maxim Krušina over 11 years ago

Updated by Michael Sanders over 10 years ago

If you take a look at the originally written issue, I'm fairly certain that the actual request is to make it so that you define which Roles have which Trackers available for them to initially report issues on.

So, for instance, you would be able to control it so that the public can not put in a Task, as opposed to Suggesting a feature.
If that is the case, this issue is a duplicate of 2647

This is highly crucial and a basic-functionality request that is pivotal to my group's projects (we run 7 projects using Redmine.)
I highly recommend that an extra row is made in the Workflow menu of the Project Settings designated "Initial Creation" or something similar. This would be a mandatory field, that all projects have and cannot be deleted. The purpose would be to effectively describe "The user should have the permission to bring it from "Initial Creation" to "New" or whatever your Default Issue may be. Some people may see fit to allow people the access to submit to a tracker, only allowing a certain status for a specific role.

Obviously, if all of the checkboxes in Workflow were unchecked, someone of that Role would not be able to Create an issue.
++1

Updated by Chad Heuschober about 10 years ago

We'd like to use a special tracker for our user stories so we can relate feature tracker issues back to their originating user stories, however, the user story owners are too nontechnical to be given free reign with the full issue tracker and have a hard time understanding how and where their requests go. Restricting them to just the one tracker would be best for us.

This issue has quite a few duplicates too. Please see:

yes please work on this ... a lot of us here wanting this feature

Updated by Stéphane David over 9 years ago

+1. At least make it so that some trackers can be set as not visible at all for a given role (cannot be created, and won't appear at all).

At the moment, it seems the only option is to create several subprojects with different trackers, but it's not really convenient

Updated by chris - over 9 years ago

Updated by Terence Mill over 9 years ago

covered by #8050, which goes beyond and enabled to set field visbility dependent of tracker and worflow status.

Updated by Julien Breux over 9 years ago

Updated by Mathias Van de Broeck over 7 years ago

+1
Would be an improvement !

Updated by Lázaro Hermoso about 7 years ago

Maybe it could be implemented by adding more functionality in 'Issues visibility' within Roles and Permissions Administration Menu.

When selecting a Role you can select Issues Visibility between:

In #8488 it was achieved to let watchers view issues eventhough their permission was set to 'issues created by or assigned to the user'. This is somehow a solution but it would be annoying to add users as watchers to every single issue.

I am sorry that I am not a developer and I cannot help with the code... :(

Updated by Toshi MARUYAMA about 7 years ago

Updated by Andy Puettmann over 6 years ago

There is sort of a workaround for this
I created a custom field type 'list' shown as 'checkbox' and made it required.
When assigning this field to only a single tracker 'project 3, bugs' I can have detailed 'create issue' permissions by making this field 'read-only' for all except the desired group.
(Field set to be visible only to 'permitted' groups)

This is not beautiful, but locks at least a few create issue and transition permissions.

Updated by Alessandro Lanza over 5 years ago

Updated by Alex Petty over 5 years ago

This is very much needed! (Does anyone have happen to have a 3.0.x compatible patch for this?)
Hopefully Jean-Phillipe Lang (and his core team) will recognize the importance of this feature and add it to Redmine's next version.

The end-to-end for how I envision this working is:
(1) Administrator creates a role (let's call it role A)
(2) Administrator assigns a user (or group) role A.
(3) Through the implementation of this feature, the administrator will be able to define which tracker-types that role A is capable of creating (so long as role A has been assigned the "add issue" permission)
(4) When the user possessing role A (and also having the "add issue" permission) clicks the "New Issue" tab, the user will see only those trackers which were defined as "can create this tracker" to role A.
(5) If the user has multiple roles with "can create this tracker" defined, each having their own set of permissible trackers, the user will be able to create the super-set of all trackers from all assigned roles.

This would truly be a GREAT and VALUABLE feature for Redmine's overall flexibility in configuration, and would be hugely appreciate by many!!

Updated by budo kaiman over 5 years ago

+1
It would be great to have two options for this

The first one is really the most necessary, the second would be nice as it would prevent a complicated system of private issues as a workaround.

Updated by Alexander Lapshin about 5 years ago

This feature very much needed!
+1

Updated by Kamil Franckiewicz about 5 years ago

Updated by alexandr al about 5 years ago

Hello everyone!
Please check a plugin http://www.redmine.org/plugins/tracker_hider and share your thoughts. Thanks!

Hello everyone!
Please check a plugin http://www.redmine.org/plugins/tracker_hider and share your thoughts. Thanks!

Hello guys!
Has enybody tested the plugin?
It allows to hide issues under selected tracker for roles/users within a project. It solves the subject partly as i see.

It would be nice to get some feeback from you!
Thanks!

Updated by alexandr al about 5 years ago

http://www.redmine.org/plugins/tracker_hider does not solve the problem

http://www.redmine.org/plugins/tracker_hider does not solve the problem

I agree that the plugin doesn't solve the subject problem exactly by prescribed way, but you can hide trackers and get desired behavior despite in another way.

I have the feedback that it is really desirable to restrict an issue creation in a certain tracker depending on role https://github.com/atlascoder/tracker_hider/issues/1 . At this topic i also see that this feature is valued.
I agree and it will be implemented.

But i wonder if it is really needed to manage such restictions on the adminitration level? I think it is better to manage at the projec level, isn't it?

Updated by Jean-Philippe Lang over 4 years ago

3.3.0 will support tracker based permissions for issue tracking. You will be able to limit the trackers for which a role is allowed to view, create, edit or delete issues.