module and/or plugin for voting

The team in charge of a project may need to vote for something (much like a poll, actually). Typical case : a design decision.

Adding such a feature seems to me quite orthogonal to current features, so this probably doesn't change redmine design, nor would it bloat redmine source code

The idea is not to propose a poll like seen on most website, which are used , but rather a tool do make decision. That's why i've called that 'voting' and not 'polling'. For example, there could be several votes at some given moment, and those votes would have a dedicated tab, not appearing on the main project page.

Note that this is different from #1011, which is 'voting for bugs', or #1158 (more like 'random poll on websites', not clear what people want, standalone or linked to an issue). I hope I describe it here clearly enough so that there's no ambiguity on the intended use.

Here's a description of how i see this (subject to comment, of course)

There's a module called 'Voting' that you can select on a per-project basis. I guess that it being a plugin is an implementation issue.

Structure of a vote (db description)¶

Maybe instead of using the internal flag, it would be wise to use redmine roles for that, but i'm not sure how to do that.

I don't think it is necessary to specify the date of closing to redmine so that no human intervention is needed.

Updated by Marcus Riemer over 13 years ago

This comes very close to a feature I would love to see: Some kind of "Decision" tracker. None of the existing trackers really applies to this situation :(

Updated by Thomas Capricelli over 13 years ago

yes, 'decision taking' is my main usecase for this feature.

Thought i think it would be great too to have polls to get feedback from unpriviliged people as well.

Updated by Maxim Krušina over 13 years ago

It's good idea, but still I think it can be great to integrate also per-ticket voting and put it into sigle "Voting" plugin.
When voting for tickets, there should be selectable for which trackers can user vote (for exaplme we'll vote in Feature and Idea trackers, not in Bug and Support)

Updated by Jens Goldhammer over 13 years ago

Updated by Mischa The Evil about 13 years ago

I'll start some work for a plugin-implementation of issue-voting soon...
More to come...

Updated by Thomas Capricelli about 13 years ago

well.. this is not really issue voting (as in #1011), rather a decision-taking process, involving non-members, or not.

Updated by Mischa The Evil about 13 years ago

well.. this is not really issue voting (as in #1011), rather a decision-taking process, involving non-members, or not.

Ok, this wasn't clear to me in first instance. Thanks for notifying... ;)

Updated by Andrew Chaika about 13 years ago

I have developed alfa version of issues voting plugin:
http://www.redmine.org/boards/3/topics/5506

Updated by Andrew Chaika about 13 years ago 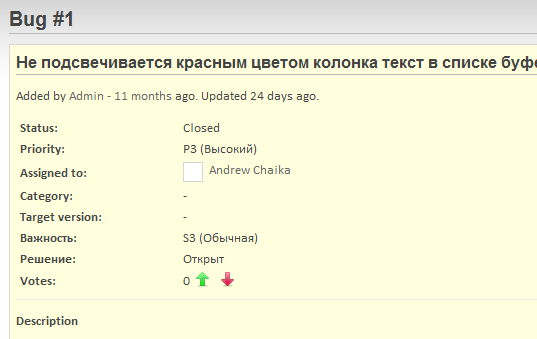 Updated by Eric Davis about 13 years ago

I'd be happy to let Andrew Chaika maintain this feature as a plugin. Having this feature in a plugin is best because it will keep the core for maintainable but allow others to work on it at their own pace.

Andrew Chaika: could you provide a link to your code repository so we can contribute to the development?