Since of #7280, IE6 rendering of issue/version/project subjects in Gantt is very ugly : 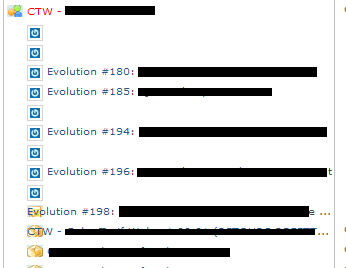 This can be seen with IE8 in IE7 document mode too.

Updated by Andy Bolstridge over 9 years ago

is this really a problem that needs fixing? IE6 is end-of-life and Microsoft is desperately trying to get rid of it, now IE9 is available (and their recommended browser), should supporting IE7 be worth the effort?

Not sure. According to http://ie6countdown.com, there is still a lot of IE6 users, though.

Updated by Robert Schneider over 9 years ago

Where is the limit? What does Redmine support?

People should use newer browser versions. Redmine could require this, as I would say. Other work in Redmine is more important than this issue.

People should use newer browser versions. Redmine could require this, as I would say.

People is not an issue, but browsers on workstations in a company are not systematically up to date (IE6 still is 11%).

Other work in Redmine is more important than this issue.

This issue disallows the use of the Gantt chart to IE6 users and the work to solve it has already been done with #7280.

But I guess it wil finally be closed as a Won't fix ; anyway we should consider adding browsers versions in Redmine requirements.

Updated by steve borgelt over 9 years ago

Thx Entienne.
I believe this happens in IE9 also, when in normal IE9 render mode. However I am using the gantt_edit patch. See notes. http://www.redmine.org/issues/2024#note-66

I'm using Opera and I think I have same problem. I test it IE8 and it works fine!

I'm using last SVN redmine
Also the graph in gantt doesn't appear. But if you move your mouse in the issue you can read the issue description.

I found that should be a Opera issue with overflow-x option:
http://www.brunildo.org/test/Overflowxy2.html
I dont know if redmine can do anything with this.

I found that in Opera, if I cut the
white-space: nowrap;
it works better!

It's time for those last 11% (now 8% at ie6countdown.com and 2.3% at statcounter.com) users/companies to do the update, while Redmine's human resources can focus on new PM features.