Add new issue as subtask to an existing ticket

Added by Jens Goldhammer about 12 years ago. Updated about 1 year ago.

Subtask feature was implemented in r3573.
In comparision to Erics patch in ticket #443 the current implementation does not allow to add a new issue as child to an existing ticket in the ticket view. You always have to navigate to the parent issue and than add a child issue. This increases the amount of clicks the user has to do.

Maybe we can enable this field via project option. 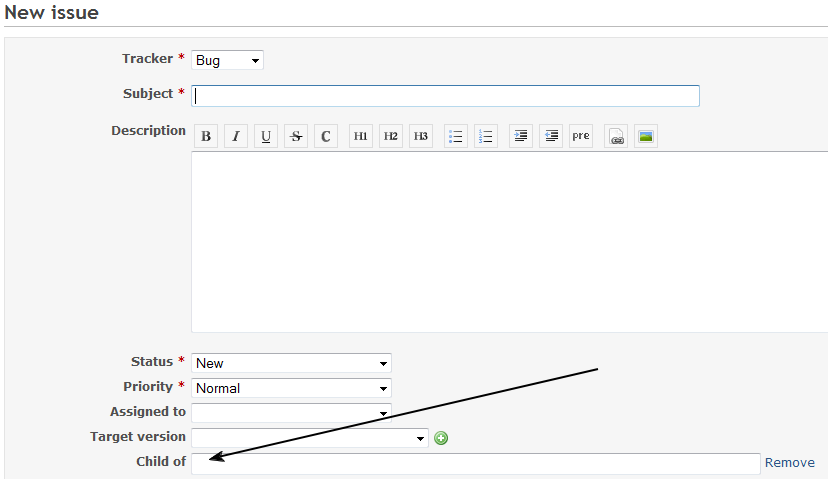 Revision 4311
Added by Jean-Baptiste Barth over 11 years ago

Added ability to create issue directly as a subtask of another one. #5484

I have had several requests for this feature as well from my users.

The parent ID field is only not rendered for new issues, this simple patch of the view will make it show.

Some more requests to make this fantastic tool better...

This is extracted from my comment on Redmine Wiki as Eric Davis suggested after correcting some mistakes.

Updated by Bruno Medeiros over 11 years ago

If you click more when editing, there is a 'parent task' field, witch allows you to set the parent task.

Updated by Felix Schäfer over 11 years ago

I don't really like this, there are too many things in the "new issue" view already. If you have any idea on how we could integrate this field better, I'm open to suggestions. It's just my opinion of course, no big deal if there's a consensus between other contributors to integrate it.

I don't really like this, there are too many things in the "new issue" view already.

I agree there is a lot there but it's a field that is already present on the normal issue form. When subtasks were committed, that field was missed on new issues. Without this field, it also make the "create a new child issue" a multi step process.

I want to redo a lot of the subissue UI for 1.1, but I think Felix's patch will be fine for 1.0.3 until we come up with a better solution.

I don't think we can say a field has been "missed" when there's a complex, explicit "unless" clause above ;-)

Anyway, I'm fine with this approach, let's include it in 1.0.3 and plan to rework on the UI for 1.1. Forgive my natural resistance to change..

Committed in r4311, with additional css stuff so that you can easily hide it in your theme if you want.

Updated by Aylin Ergun about 1 year ago