The roadmap provides a highly-configurable, version-based view on the issue tracking system that helps planning and managing the development of a project. It also provides an in-depth (version-based) overview of the current state of your project.

Note: the roadmap menu-item shows up in the project-menu only when the issue tracking module is enabled for the project and at least one version is configured in the projects settings.

If you select the Roadmap you will get an overview of the current state of your project, like the following: 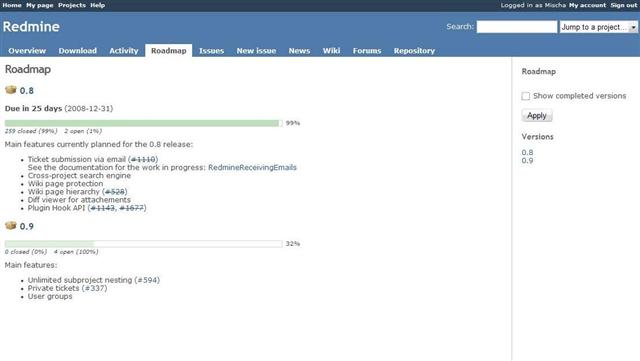 The above mentioned view contains the following "blocks" of information for all (incomplete) versions:

If you click on the version itself (0.8 right from the

-icon), you can get a detailed view of the current, overall state of a specific version. This is the version-view.

If you have the appropriate permissions you can change the Roadmap-view in two ways:

The contextual sidebar on the right of the roadmap provides several things: