Added by Ronie Henrich over 12 years ago. Updated 5 months ago.

Updated by Thomas Lecavelier over 12 years ago

The target version field has to be set when it will actually part of the target release.

as this feature is part of wikipedia, it would be nice to get this into redmine-wiki, too.

e.g. I got a table with serverIDs, hostnames and row-numbers, would be nice to re-sort the data dynamically.

Not very cool, but usable:

It was not working on my 2.1.4.stable.10880. Maybe the plugin is missing some installation script or there is a change in plugin structure since 2.x.

Operator '%' seems to be overridden to do HTML escaping, so do the concatenation in other flavor:

Updated by Serg Astra over 4 years ago

Updated by Denis Sidorov about 4 years ago

Does it support Markdown tables?

Updated by Plastik Schnitzer over 1 year ago

Are there any plans to include this feature to stock redmine? It would be highly appreciate to have a table sorting function in wikis and tickes like its possible on wikipedia for example.

Updated by Takenori TAKAKI 10 months ago

I made a patch to sort the table elements under 'div.wiki'.
To implement the patch, I used a pure JS library called 'tablesort'.
https://github.com/tristen/tablesort

Updated by Go MAEDA 10 months ago

Although there is a limitation that numbers are treated as strings when sorting, the feature is useful.

Updated by Kevin Fischer 10 months ago

There was a little problem with the patch (or was it just on my side?): It assumed that the JavaScript/CSS files were already there and thus could not be applied directly. I fixed that.

I tried the patch and function-wise it looked good to me.

Maybe little adjustments are necessary to make it fit better into Redmine's design, but I don't really feel qualified to make any calls on that, so maybe someone else can look into that?

Also: If a new library is included, are there any credits that need to be adjusted anywhere?

Updated by Go MAEDA 9 months ago

Although there is a limitation that numbers are treated as strings when sorting, the feature is useful.

I have updated the patch to be applicable to the trunk r19831. In addition, updated tablesort to 5.2.1 and added tablesort.number.min.js to sort numeric columns correctly.

Update the patch to fix a small UI issue that the text in a table header is not exactly centered when the column is not sorted. In the screenshots below, "A" is shown slightly to the left, not centered. 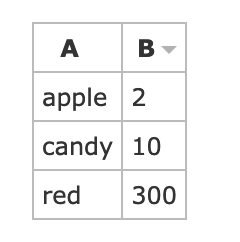 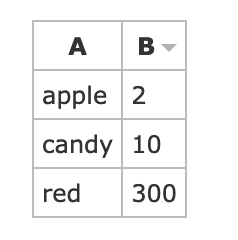 Committed the patch. Thank you for your contribution.

Updated by Mischa The Evil 5 months ago

I actually think it is questionable whether or not this feature should be implemented within the Redmine core in this manner. Some considerations: