Added by N G over 11 years ago. Updated almost 3 years ago.

Eric - it would be great if there was a way to collapse nested structures in the Gantt chart plugin you developed.. for example, if we don't want to see all the tasks/bugs for our versions, but just want a high level picture of what's coming up, it would be nice to be able to collapse each version to a single row that shows the due date for the version. Possible? Thanks!

It would be possible but it will take a lot of work because of how the Gantt chart is rendered. If someone wants to work on this, I'd be happy to review a patch for it.

+1 I've got a lot of Versions (non-software PM "milestones")

At least being able to collapse the Roadmap's version sections would be start - and probably easier?

Updated by Pierluigi Soana over 10 years ago

Updated by Luis Serrano Aranda over 9 years ago

No. This issue is "collapse/expand in Gantt chart" like Redmine SCM browser.

Updated by James H over 7 years ago

Hi all,
is any progress on collapse/expand Gantt tasks hierarchy?

Updated by Florian Riedel about 5 years ago

Updated by Mischa The Evil over 4 years ago

Updated by Randa Bustami over 4 years ago

Hi All,
is there a chance to make it soon pls ?

Updated by Mizuki ISHIKAWA about 4 years ago

I created the function collapse/expand of the Gantt chart.
I attached a patch. 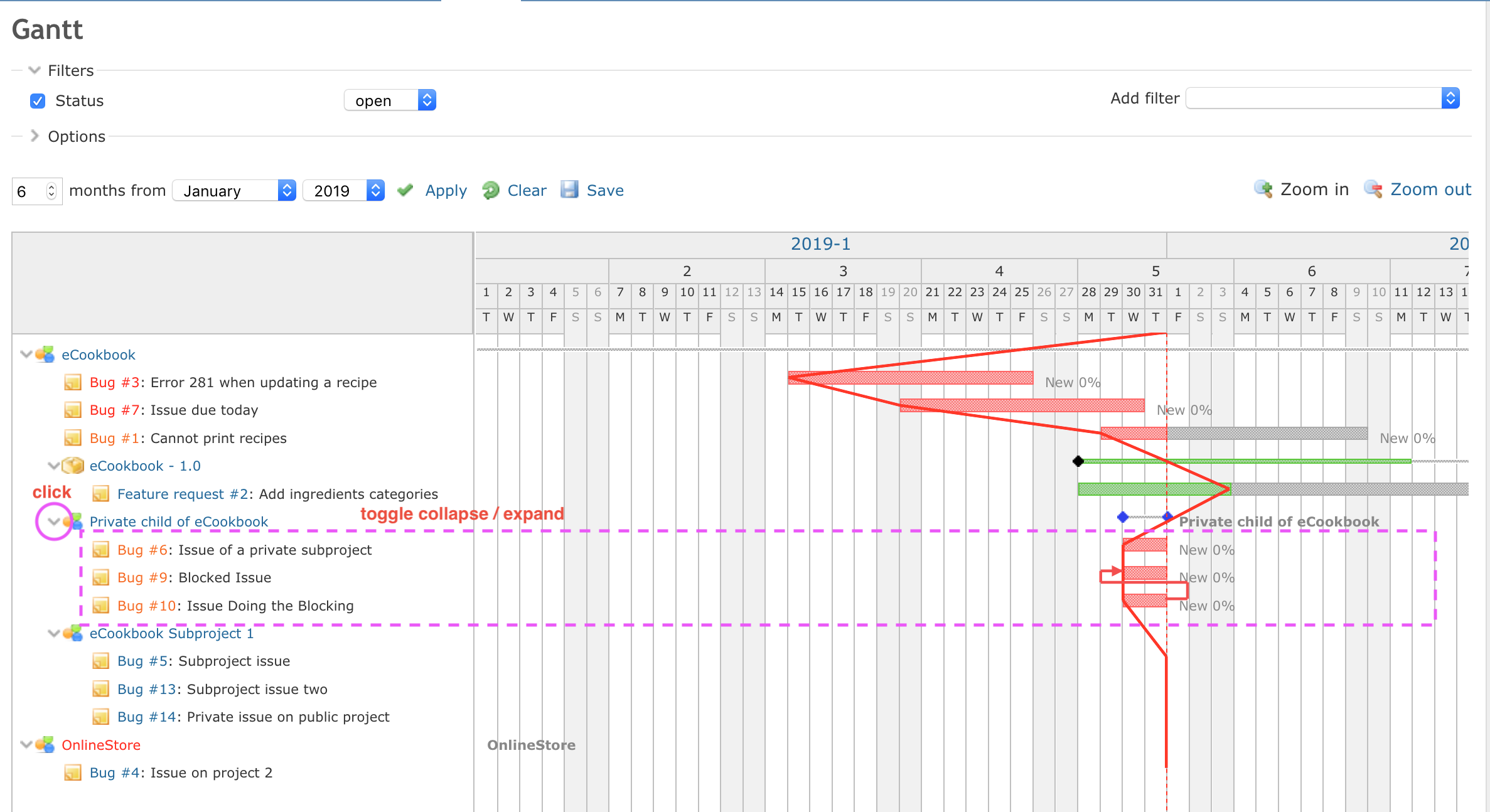 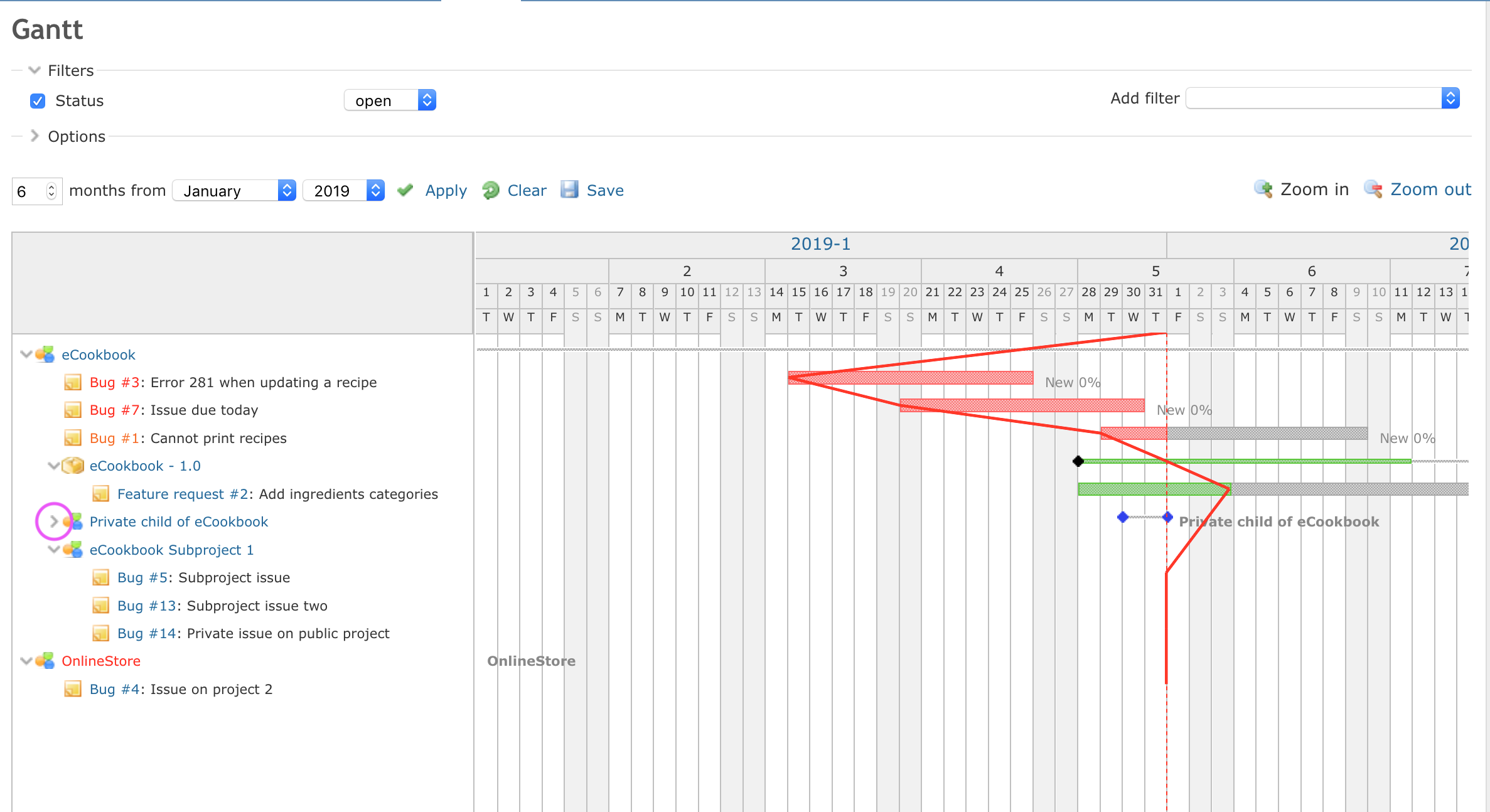 LGTM. It is an excellent improvement. Setting the target version to 4.1.0.

After applying the patch, objects in the same indentation level are not horizontally aligned. Please see the screenshot below. Could you check the patch? 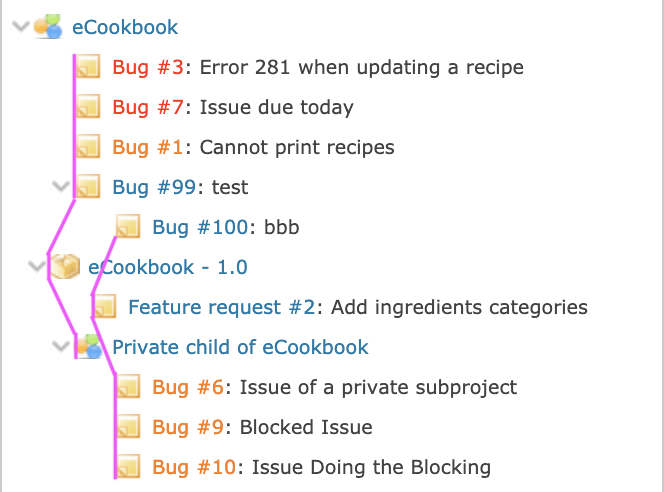 After applying the patch, objects in the same indentation level are not horizontally aligned. Please see the screenshot below. Could you check the patch?

I confirmed that all issues in the previous patch have been fixed. Thank you for working on this. I will commit this patch within a few days.

Committed the patch. Thank you for your contribution.

The patch breaks GanttHelperTest. Could you fix the failing tests?

The patch breaks GanttHelperTest. Could you fix the failing tests?

Sorry, I fixed the failed tests.
I rebuilt a patch.

Why I have this problem?

In this pic if I collapse Mechanical Design then software will disappear, even though they are inline projects.

Updated by Go MAEDA about 2 years ago