Added by Jan from Planio www.plan.io about 6 years ago. Updated 5 months ago.

I think, we should make Redmine an OAuth2 provider, so that client apps using Redmine's API can ask users to authenticate rather than asking for an API key. Another goal would be to limit access to API client apps, so that not all apps gain access to the full scope of data a user has access to.

I'm working on this currently and I will hopefully be able to submit a patch soon. Here's a first screenshot: 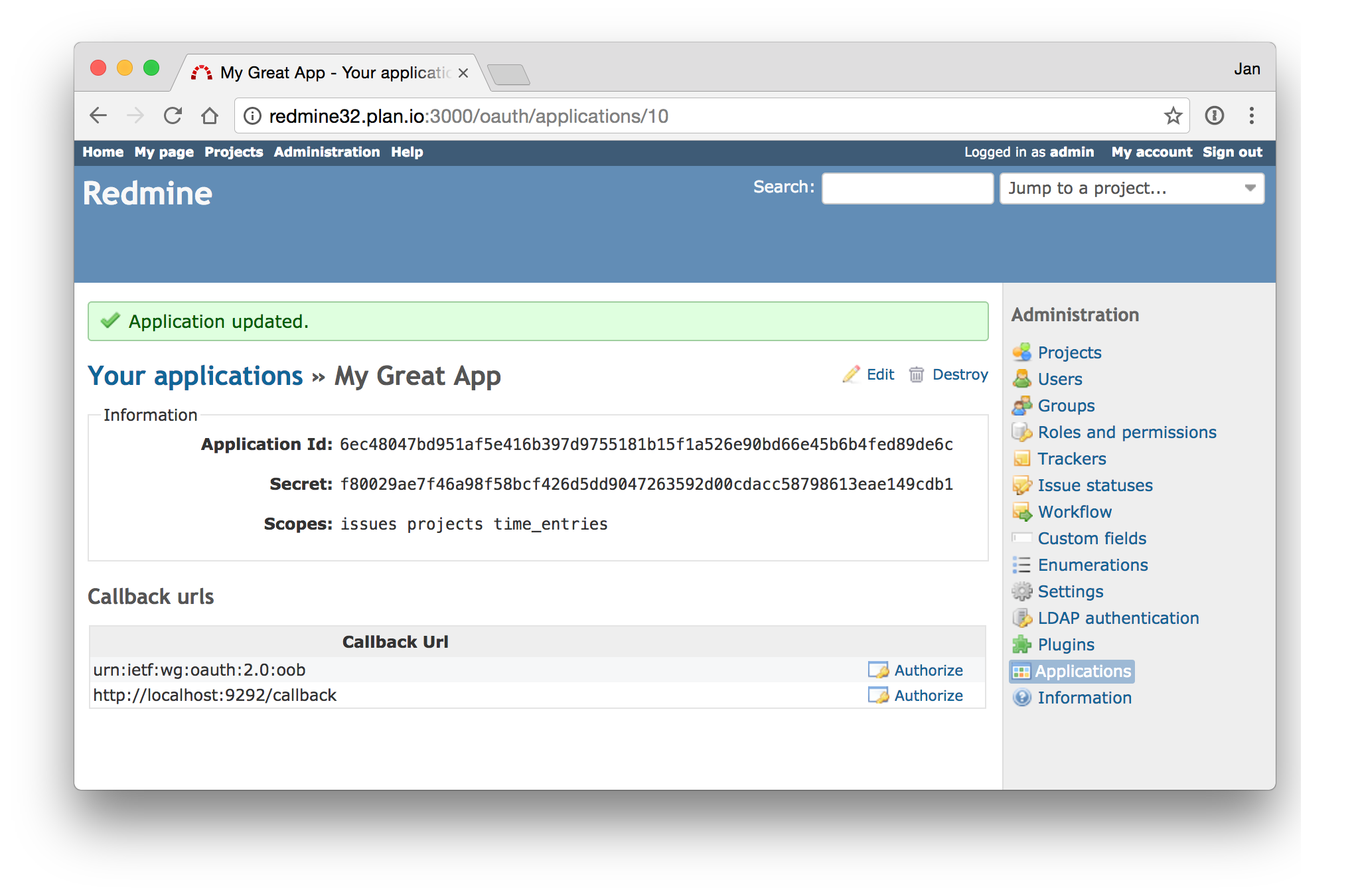 OAuth2 is a widely adopted protocol for granting access to API client applications. More information can be found here:

Here are a few screenshots that show how it looks like: 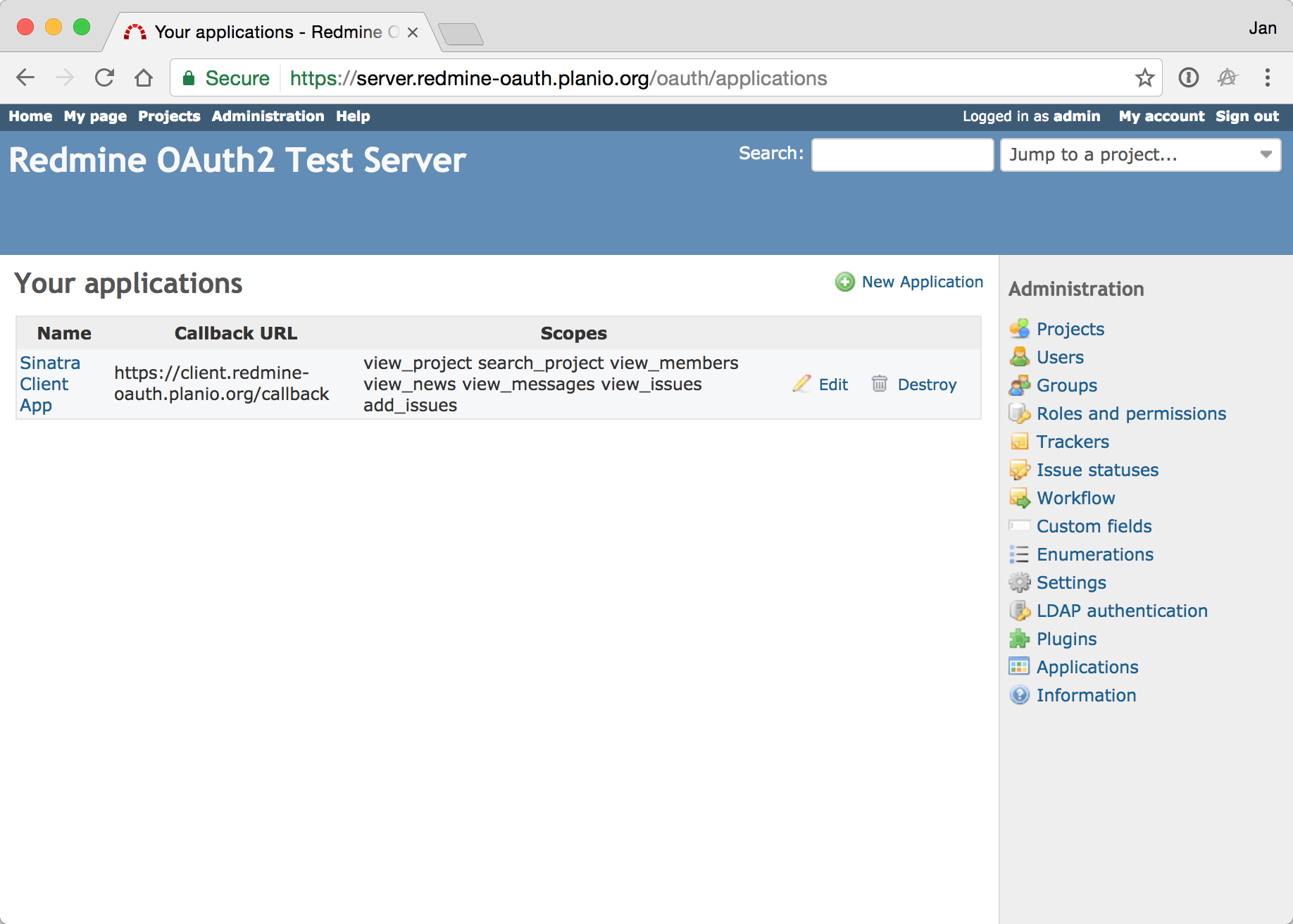 Admins are able to create/modify/delete OAuth2 client apps from the user interface.

OAuth2 App credentials are generated and can then be used in API clients. 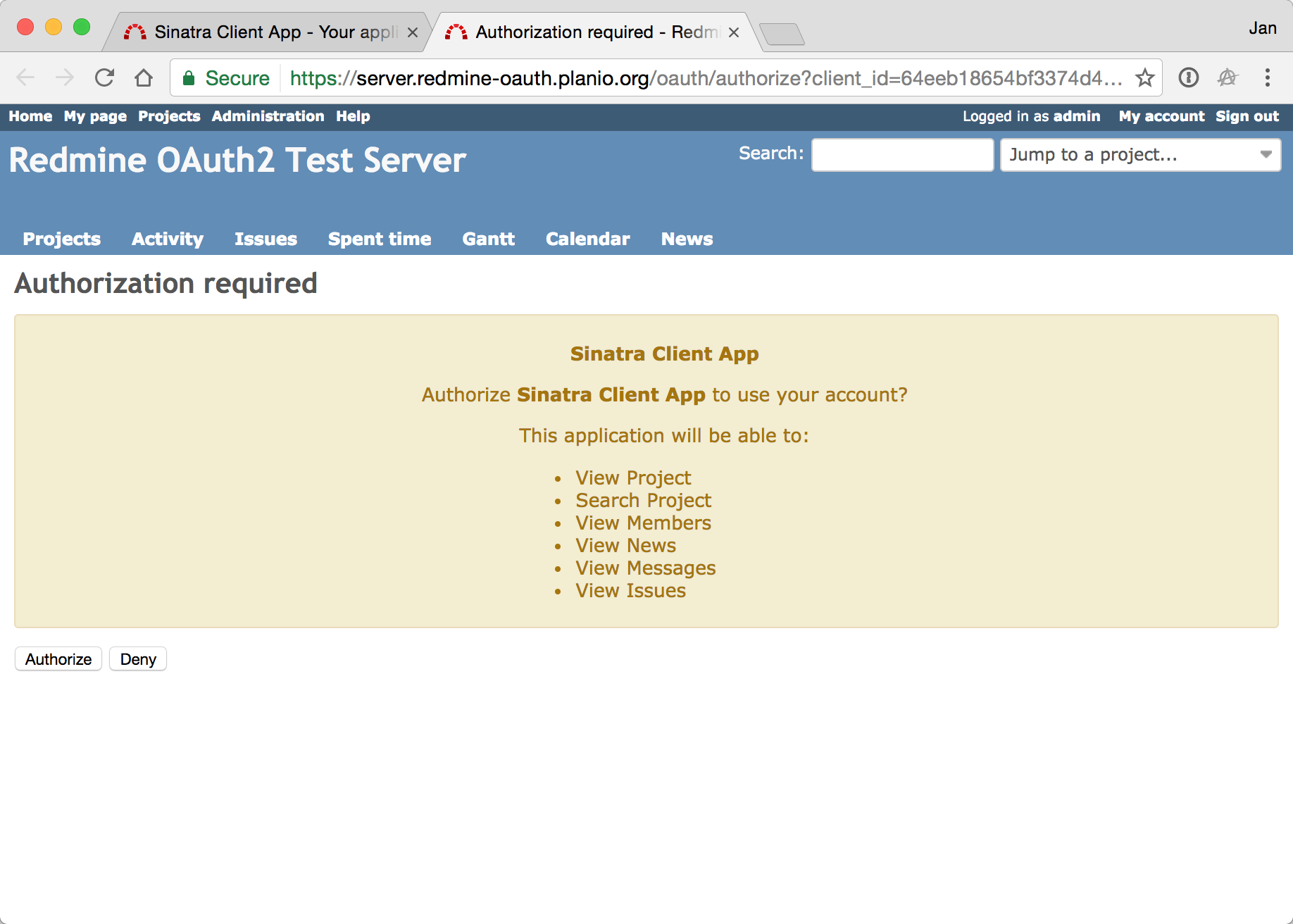 In order for an App to gain access to Redmine, it must ask the user for permission. 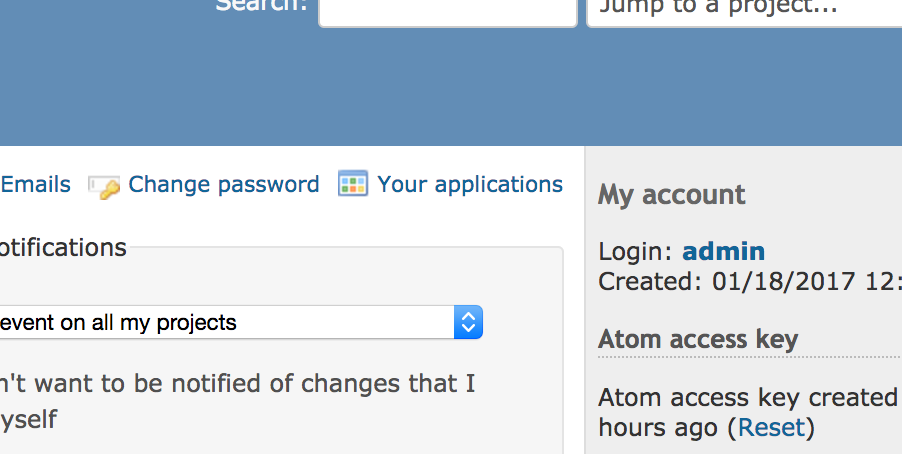 Regular users are able to see which apps currently have access to their data from their My Account area. 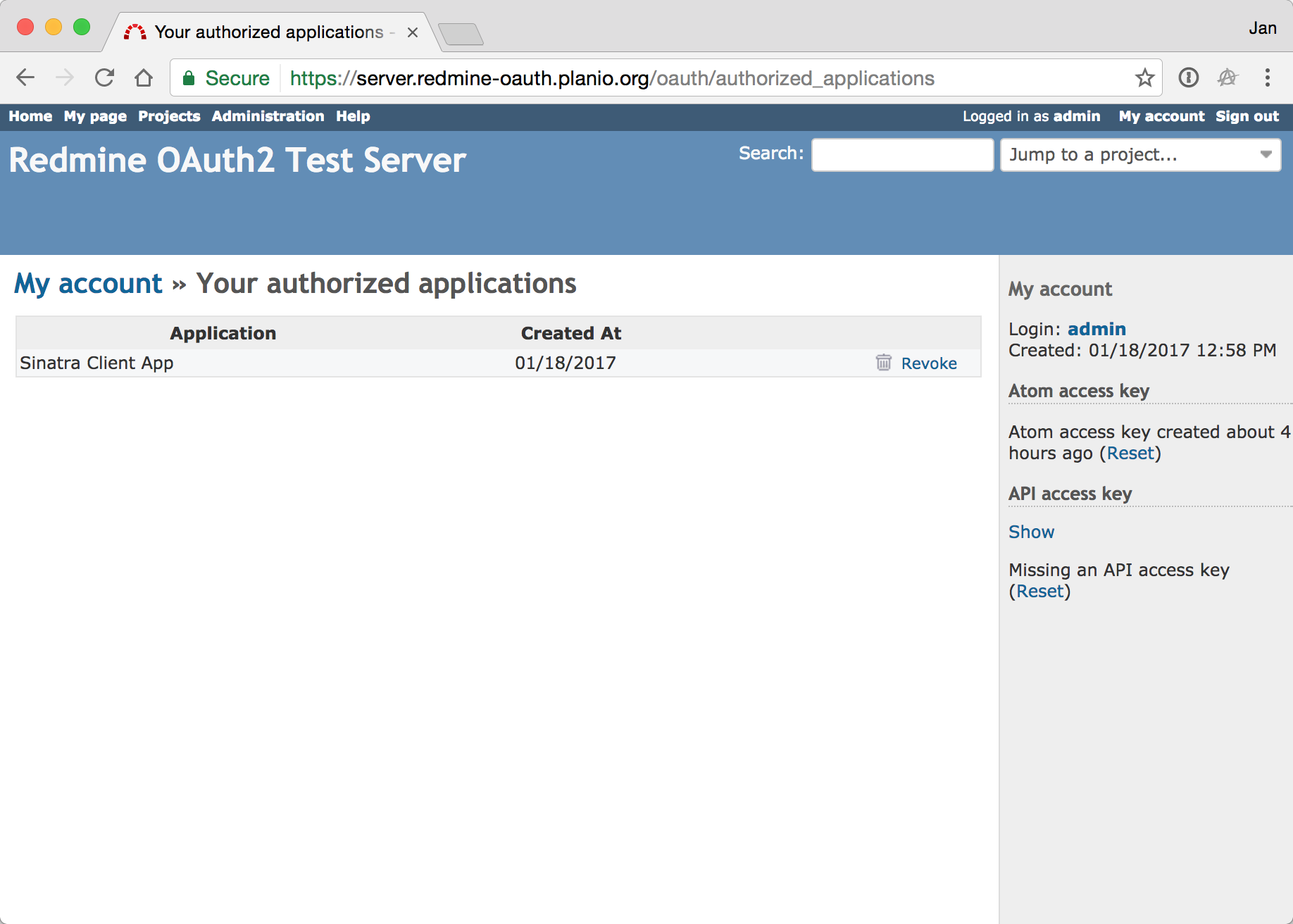 Regular users are able to revoke access to individual apps.

We are providing a live demo server and client via these links:

Username/Password is admin:oauth2. The content on this server will be reset every 60 minutes. Feel free to create your own OAuth2 applications via the Admin section, but please don't modify/delete the "Sinatra Client App".

You can use this app to try out the authentication/authorization flow. Feel free to create your own user accounts on the Redmine server for this.

The /issues API will only work if the view_issues scope is requested. If only the standard scopes are requested, you will see an error here (on purpose).

Feel free to download the client app code from our Planio repository to try out everything locally.

Implementing OAuth2 "by hand" seemed like re-inventing the wheel. Building and maintaining such security-critical code is both error-prone and non-trivial. The Doorkeeper Gem is the de-facto standard solution for implementing an OAuth2 provider in Rails. It's tried and tested, well-maintained and used by many high profile apps and services.

Integrating it with Redmine required only minor changes to Redmine's code base itself which should hopefully make maintenance of this functionality quite easy.

Why can only admins create apps?¶

The decision that only Redmine admins can add new API client applications is debatable, but it felt like the easiest solution for this first version. Allowing regular users to create apps would have required more overridden Doorkeeper controllers, new Redmine permissions (e.g. add_apps, view_apps, destroy_apps, etc.)

In addition to that, enabling/diasbling things like the REST API, JSONP support, etc. is currently also only available to admins, so I thought it would be consistent.

Some translations are missing! Where are the I18n keys?¶

At the moment, I've included them via the doorkeeper-i18n Gem. Technically, we could pull the locales in to Redmine's code base. However, – in the spirit of open source – I'd advcate in favor of keeping them in the external Gem and working with the Doorkeeper maintainers to improve them if needed. I've fixed two issues with the locales already via pull requests and they were accepted rather quickly.

That's it for now. I am looking forward to your feedback!

Updated by Marius BALTEANU about 6 years ago

IMO, I think that the OAuth2.0 provider will be a great addition to Redmine and a feature that we'll use for sure at our future integrations with other apps.

What I like very much is the separation between the users and applications. Now we've some users named like "<application_name>-Generic User" used to authenticate the API calls. Having the possibility to define them as apps and manage their permissions from a different screen is very useful.

Updated by Cheyenne Wills over 5 years ago

What is the current "status" of this? Is this kind of planned for a future release?

We have two apps that could benefit by this (I've been looking at the redmine_oauth_provider plugin, but it appears that it doesn't work with the current level of Redmine).

Updated by Peter Volkov over 3 years ago

I think that "Needs feedback" is a wrong status here. According to #12827 this status means that this ticket is waiting for author's feedback, and such tickets are invisible for developers. Jan could you updated patchset and Status here?

Updated by Jan from Planio www.plan.io over 3 years ago

I'm setting the status to New then, as requested. Ideally, we could get some more feedback from other contributors if the feature is desired and if yes, I'd be happy to rebase the patches on current trunk.

Updated by Bernhard Rohloff over 3 years ago

I think it can be a nice feature for Redmine and would make it much easier to manage things like bots, dashboards and applications of that kind. IMHO it's definitely worth a rebase.
+1

Updated by James H over 3 years ago

Updated by Keisuke Matsuura about 3 years ago

Updated by J. Pablo Zebraitis over 2 years ago

Updated by Jens Krämer over 2 years ago

I rebased this patch on current master and added a brief system test that covers application creation, authorization and usage with an actual oauth2 client.

I'd also like to add that, since a few weeks, we're using this feature successfully at Planio for authenticating the native Planio Storage client apps.

Updated by Jan from Planio www.plan.io over 2 years ago

Thanks Jens. I would really enjoy seeing this making its way into a future Redmine release and I believe it will help Redmine get more third party apps and integrations!

Updated by Jens Krämer over 2 years ago

Another update to this patch. Notable changes are:

We also just released the omniauth-redmine-oauth2 gem (source code at Planio and Github). We also built a small Rails app to demonstrate usage of the gem .

Currently this patch makes two I18n tests fail. This is due to the inclusion of the doorkeeper-i18n gem, which introduces 4 locales that aren't present in Redmine. In general, we would need to decide if we want to include these 3rd party translation at all (they do not cover all of Redmine's locales by a large margin) or if we incorporate them into Redmine. As of now the patch just overrides a few strings to make the wording more Redmine-like.

Due to the Doorkeeper upgrade I was more or less forced to squash the last 4 commits of the previous patch series, so it's down to 4 commits now.

Jens, I've started to look to the provided patches and to test this feature. For now, I've committed all 4 patches to the Gitlab instance in order to get the tests results. Besides the I18n test fails, there are some Rubocop warnings that should be fixed.

Am I wrong if I say that patches 0001 and 0002 can be extracted from this issue and delivered as separated ticket? In this way, we will down this feature to 2 patches and it will be easier to maintain/rebase it.

I've assigning this to the next major release version because the changes are too huge for a minor version.

thanks for looking into this! I just created #35075 and #35076 with the first two patches of this series. Both should not cause test failures or rubocop warnings. I'll look into these next and update this issue accordingly.

Updated by Jan from Planio www.plan.io almost 2 years ago

Thanks Marius for looking into this. I think it should greatly improve the Redmine API to use state of the art authorization!

here are the remaining two patches, updated to the most recent doorkeeper release (5.5.1), rebased on current master, and hopefully with a lot less rubocop warnings.

Updated by James H over 1 year ago

Updated by Marius BALTEANU over 1 year ago

Updated by Harald Welte 12 months ago

Excellent proposal, looking forward to seeing this merged for the next major release.

Updated by Marius BALTEANU 12 months ago

The patches need some changes to work with Rails 6 and zeitwerk autoloader.

Updated by Gael Duret 5 months ago

We actually use RedMine in our company and we use the IMAP fetching email process to create our tickets. This process will stop working on October first as we are connected to an Office365 server and Microsoft will deactivate the basic authentication.
We are looking for a way to use OAuth authentication.
Our Redmine version:
Environment:
Redmine version 5.0.0.stable
Ruby version 2.6.9-p207 (2021-11-24) [x64-mingw32]
Rails version 6.1.4.7
Environment production
Database adapter Mysql2
Mailer queue ActiveJob::QueueAdapters::AsyncAdapter
Mailer delivery smtp

We do not have any Rugby knowledge in the team, we are looking for some explain / help on this subject ?
Which patch for our version ? How to setup a patch ?